THIS FUND IS UNDER RECONSTRUCTION AND WILL BE ADVERTISED WHEN AVAILABLE AGAIN!

The Colleen L Fraser Scholarship Fund established in 2005 by the Progressive Center for Independent Living (PCIL) following her tragic death on September 11, 2001. It is through the Fraser Fund that we honor her contributions to the disability community. Scholarships are awarded to individuals who mirror the passions of Colleen by showing outstanding efforts and perseverance in advocating on behalf of themselves and other individuals with disabilities and those who demonstrate leadership abilities.  These awards provide opportunities for recipients to achieve their goal of living independently. 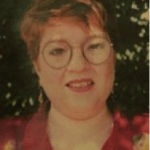 Fraser was executive director of Progressive Center for Independent Living and vice-chair of NJ Developmental Disability Council when she passed on September 11.  A native of Elizabeth, NJ and a graduate of Rutgers University, Fraser was born with a bone condition that kept her height at 4 feet, 6 inches.  Artistic and theatrical, with her fiery red spiked hair and studded pierced ears, she devoted her life to advocacy in support of people with disabilities. Whether gazing on an oddly formed hunk of driftwood or a person with disabilities, Colleen always saw the possibilities.

“She loved the idea that all people are created equal,” said Ethan B. Ellis, executive director of the New Jersey Developmental Disabilities Council, “This woman believed the most important thing she could do was to convince [others] of the humanity of people with disabilities.”

For 20 years, Colleen Fraser showed her grit and tenacity as she built a national reputation fighting to improve the lives of people with disabilities.  Colleen’s voice was not silenced when she died aboard United Airlines Flight 93, her passion lives on through the Colleen L Fraser Scholarship Fund.

In July 2013 Colleen was honored by Union County.  See the article here.

Donate to the Fund Here: